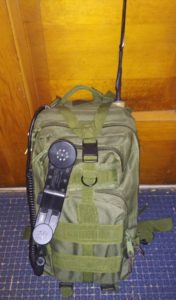 The “Green Radio” seen here was made to simulate a military radio. It uses a converted CB Radio for its guts. The bag has 10 NiMh “D” batteries wired in series below the radio. The antenna is an old Larson mobile CB whip that has been shortened for 10 Meters, and there are provisions for a PL-259 cable connection. The whip is covered in electrical tape to simulate a MIL “brush antenna”, the handset is the real thing! The battery charger fits in one of the pockets and counterpoise wires can be deployed out the bottom. Built by WA3NFV. 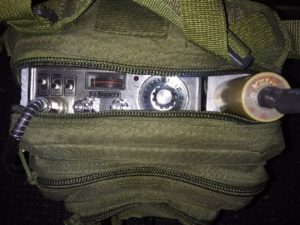 The radio inside the back-pack is a Pace CB-144 and has been re-crystaled and re-tuned for 12 channels in the 10 Meter Band. This radio was selected because the circuit design provides low current draw and the T/R switching is relay based, which is a requirement for using the MIL handset. The range of the radio in “field service” is around four miles, which is similar to the real MIL counterparts! Like the other radios seen here, 29.005 MHz is the common channel. With the exception of the walkie-talkies, each of the radios have at least four channels in the 10 Meter Band. Converted and owned by WA3NFV. 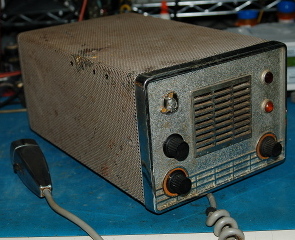 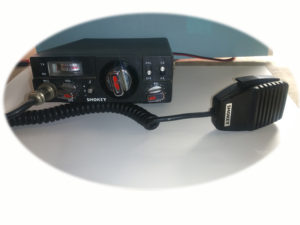 Found in a box lot at an Auction, this “Smokey” CB was complete with power cord, Mic and manual/Schematic.  23 channel crystal controlled.  Dan figured out the proper crystal for me to order and helped with the conversion/tuneup. Owned by KS3Z. 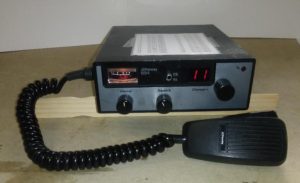 This J C Penny was the third of the contemporary conversions by WA3NFV, and the second J C Penney, it is now owned by KS3Z, and was purchased at the club auction probably 2014-2015. It is one of three with an LED channel display which is handy for mobile operation. Intermittent problems with the transmitter, which occurred subsequently, in both J C Penney radios, still has Dan scratching his head. Until the issue is resolved, conversions of this model should be avoided. 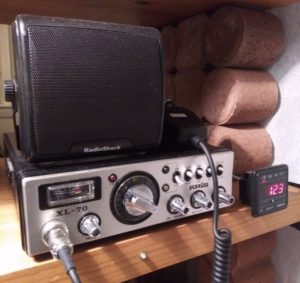 The Kris XL-70 is an AM / SSB transceiver that was likely produced in the early 1970s. It uses crystal mixing and currently has 12 channels installed, including 28.360, .370, .380 and .400. It produces approximately 12 Watts PEP output and the first contact was PA to CA! A dozen or more circuits require tuning to make this unit work on 28 MHz and it is not a conversion for the faint of heart. Converted and owned by WA3NFV. 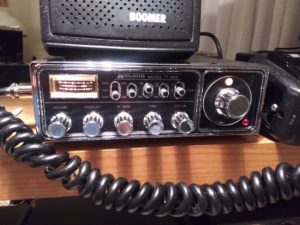 The Midland 77-888 was the 40 Channel follow-on to the 23 Channel 13-888 version. Like so many of the Midland radios this particular model was manufactured in 1977. This unit wins three awards: 1. It has the most chrome. 2. It has the most controls and switches (there’s even one on the microphone). 3. It was the least expensive, coming in at under $18, including shipping! Yet an another eBay find, with great cosmetics and post conversion performance. The original microphone also worked. No parts were required for the conversion. Apart from the tuning that went on, the circuit board required the addition of two jumper wires and two cut traces. Converted and owned by WA3NFV. 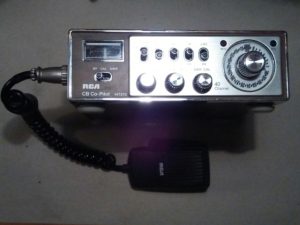 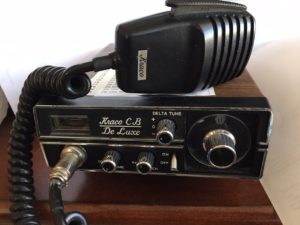 Once the “Black Sheep”, now revered by all! The Kraco CB De Luxe. This little rig has everything including chrome and imitation wood grain! As CB radios they were sold by small department stores and retailers that didn’t have their own brands. This radio uses a PLL circuit, so, no crystal swap-out is needed to get to 29 MHz, just a change in the arithmatic! Converted by WA3NFV and owned by N3RSG. 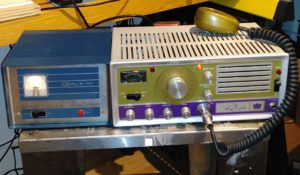 The Courier Royale seen here was a bit of a brutal conversion. In addition to the conversion, it needed a restoration, which was completed by N2VUZ. A crystal was located which would allow the radio to operate on our favorite frequency of 29.005 MHz, however, it was of modern design and housed in a HC-49/U holder. Soldering it into the circuit was no problem but trying to come up with the proper loading and feedback was another matter.

The radio has a bit of an odd frequency conversion scheme which leads to a first IF frequency of 6.000 MHz. Odd, but apparently not unique because we’ve seen it in other radios of similar vintage. The odd low first IF means that careful tuning is required to remove the resulting spurious frequency from the transmitter output. Additionally, the 6 MHz IF, is also problematic, in that it is one of the main frequencies used by Radio Havana, and the IF rejection of the radio is not particularly stellar! Not bad though, if you don’t mind listening to Communist propaganda in Spanish, while chatting with your buddies on ten meters.

Because of the color scheme, its been nick named the “Crown Royal”, by several of us. The companion amplifier is now being used on the frequency for which it was designed, well kind of, but, the explanation would require a history lesson. The conversion was performed by N2VUZ, WA3NFV and the owner KC3HHK. 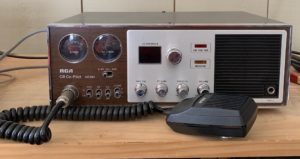 Like the other RCA 14T260 seen on these pages, this example was an interesting conversion. Oddly, it produced RF output on all channels, where the others “ran out of steam” on the higher frequencies. One would normally expect these radios to act very similarly, at least within models or brands. Because of the synthesizer arrangement, common to these radios, Channel 10 ends up being the lowest frequency channel. The receivers seem to always cover the converted channels, which makes for interesting listening in the FM portion of the band. Converted by WA3NFV with assistance by owner WA3YLQ. 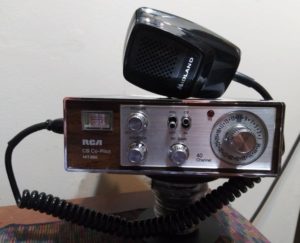 The RCA Co-Pilot, 14T260 was the first of the contemporary conversions by WA3NFV and the first contact with this radio was to South Wales in the British Isles, from PA. This radio is very similar to the other 40 channel units and requires no additional parts, just a change in the math of the divider in the frequency synthesizer to change the frequency and of course a re-tune of several circuits. Assuming the radio has a microphone when obtained, it’s unfortunately often not in operating condition. 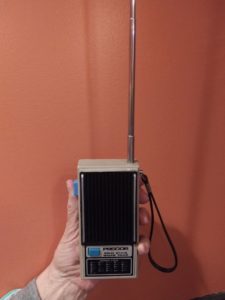 Much like the Archer, found elsewhere on these pages, it’s another kids walkie-talkie that operated in the CB band and probably of similar vintage. It was an eBay find, purchased for the 10 Meter conversion project and selected amongst others because of its good cosmetics. Finding a suitable 10 Meter crystal takes far longer than the conversion! Once found, just swap out and retune using a field strength or “S” Meter. Converted and owned by WA3NFV. 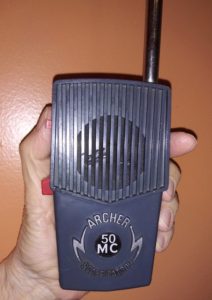 The Archer (Radio Shack) Space Patrol was a series of kids walkie-talkies that operated in the CB band, often on channel 14 and over the years they came in many shapes and sizes. The one pictured here (circa 1970) was purchased specifically for conversion to 6 Meters. The receiver is a regen and the transmitter is crystal controlled on one channel. Once the oscillator coil is rewound and the 6 Meter crystal kicks off the receiver naturally follows. Converted and owned by WA3NFV. 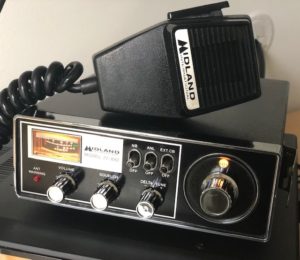 The Midland radio pictured here is very representative of those of the era. This 77-882 was manufactured in 1977 and purchased from an eBay auction, the condition is very good considering its age and is amongst the best receivers and certainly the best sounding of the mobile types shown on these pages. Like many of the others, this has a synthesized design which makes for an easy conversion and produced just over 3.5 Watts on Ten meters. The rig has a great set of features including Noise Blanker, Antenna Warning Indicator (high VSWR) and “Delta Tuning”. Converted by WA3NFV, assisted by KC3HHK and the owner W3RKL. 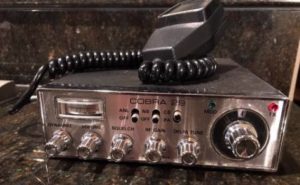 The Cobra 29, pictured here is one of many in a family produced for decades. This particular radio, like the Pace CB-144, and the Smokey is a 23 Channel version and represents a simple and quick conversion, utilizing a readily available crystal installed or soldered into one of the crystal positions. Like the others, 29.005 MHz is one of four frequencies available post conversions.  Converted by WA3NFV and owned by KC3HEQ.